Jonathan Sexton of Ireland is “tip tackled” by Alex Dunbar of…

Jonathan Sexton of Ireland is “tip tackled” by Alex Dunbar of Scotland during the RBS Six Nations match between Ireland and Scotland at the Aviva Stadium on March 19, 2016 in Dublin, Ireland. Get premium, high resolution news photos at Getty Images

[dropcap]S[/dropcap]cotland have been beaten by Ireland in their final game of the RBS 6 Nations by 35-25, ending hopes of a rare three game winning streak and a top half of the table finish. Tries came from Stuart Hogg, Richie Gray and Alex Dunbar.

Despite plenty of attacking endeavour and three great tries, the men in blue struggled to keep pace with the streetwise Irish, who took almost every try scoring opportunity they were given. Their task was ultimately made impossible by repeated indiscipline and two yellow cards, during which Ireland scored 3 of their tries.

If Scotland had hoped to pick up where they left off against France last week they were in for a rude awakening. The Irish forwards came out like rabies infested greyhounds and dominated both territory and possession for the first 20 minutes of the game through a combination of effective breakdown work and a liberal interpretation of the rucking laws. For all the efforts of Barclay and Hardie, they couldn’t get a sniff.

Within minutes Jonny Sexton had Ireland 6 points up, taking over David Humphreys to become Ireland’s second highest ever points scorer. Despite being starved of the ball, captain Greig Laidlaw struck back in the 14th minute to reduce the deficit and bring his personal points tally up to 500 for Scotland.

Following another Sexton penalty it looked like Scotland were going to have a very long day of it, that is until Stuart Hogg took the ball on the halfway line and ran an incredible angle through the Irish defence leaving players like Keith Earls for dead.

For anyone who has doubted Hogg’s finishing ability or sheer acceleration, this will have been a good reminder why he’s probably the most on-form player of the championship.

Ireland then went on the attack and proceeded to hammer the Scottish line through bruising run after bruising run. John Barclay was repeatedly pinged by referee Pascal Gauzere for his work on the ground and eventually the Frenchman lost his patience and sent the Scarlets flanker to the bin.

Many will feel this was a harsh decision

Ireland instantly took advantage of their man advantage through a savvy diving try from South African project player CJ Stander. Sexton then converted to make it 16-10 after 28 minutes.

Scotland desperately needed to keep Ireland shackled in order to limit any more damage during the remaining sin bin time, but instead Duncan Weir kicked the restart out on the full.

From the proceeding scrum Ireland struggled to make any headway and when Sexton chipped to the corner it looked like it’d would be easily shepherded by Hogg. Unfortunately there seemed to be a miscommunication between the fullback and Tommy Seymour which led to the ball ricocheting between the two and Keith Earls pouncing on the loose ball to score a gimme try.

Six minutes into the sin bin and Scotland had conceded two tries. They say, on average, a yellow is worth 10 points. For Ireland it was worth 12.

With Barclay back on, the next ten minutes saw Scotland hammer the Irish defence with little purchase. Eventually Laidlaw eked out a penalty on the stroke of half time to keep Scotland just in sight.

Despite a strong and probing start to the 2nd half from Scotland, the Irish came back and started to exert pressure through a series of barnstorming runs and clever tactical kicking. Camped on the Scotland line it looked like they’d been effectively repelled until Connor Murray once again exposed the weak defence around the ruck to score.

Following the try and conversion Vern Cotter made a double substitution bringing on Stuart McInally for Ross Ford and Josh Strauss for John Hardie, presumably to add some ballast to the struggling defence.

Shortly after Scotland got their first put in to the scrum after 53 minutes, which had to be some kind of record (we’ll check and get back to you).

With the game looking all but gone, Scotland threw caution to the wind and started to attack from all quarters. Their accuracy let them down in multiphase play, but eventually some strong runs from Tim Visser and the ever improving Duncan Taylor took them up to the Irish line. Some quick passing then stretched the defence and put big Richie Gray through under the posts for his 3rd Scotland try.

From the following restart Scotland once again refused to kick the ball and attempted to attack from deep inside their 22, with limited success. And it was as they worked their way slowly towards the Ireland half that Alex Dunbar over-zealously cleared Jonny Sexton out of the ruck in a judo style move.

Most would agree that it was a penalty, but some pantomime acting from the Irish fly half helped inspire the referee to produce another yellow card – much to the chagrin of the Scotland players and fans.

The fact that he appeared to feign a head injury will come as quite a surprise when you consider the furore around the comments of Eddie Jones just a couple of weeks before.

From the penalty Ireland kicked to the corner and within a minute of the sin bin the unlikeliest of try scorers, Devon Toner, went over under the posts to put a Scotland victory all but out of sight at 35-20.

Despite being a man down Scotland bravely continued to try and and attack from anywhere, but found very little purchase. It wasn’t until Sexton, who had miraculously recovered from his head blow, was himself sent to the sinbin that Scotland were able to break through. This came from recently returned Dunbar who, thanks to some quick hands, strolled over on the right wing.

Greig Laidlaw, aware that time was running out, took the conversion quickly and missed.

With hope fading a dodgy knock on from Josh Strauss handed Ireland back the ball and brought an end to the game and any hopes of a 3rd successive 6 Nations victory.

[blockquote author=”Vern Cotter following the match” pull=”normal”]“This team is going forward. People should see that. Even though we were ill-disciplined today we were still in it at 28-20. At crucial times of the game we need to learn to be cool and just hold the ball.”[/blockquote]

Regardless of this result, this has been Scotland’s best 6 Nations in recent memory. Not only have they refound the lost art of scoring tries, they’ve also strung together long periods of multiphase play and were within a score or two of beating every team in the tournament.

This is a young team and such signs are encouraging for the future. Finally we have a team we can really get behind and believe in.

I for one am proud as punch of the players. #AsOne

What did you think of the the result and referring decisions? Let us know in the comments below. 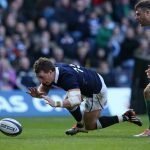 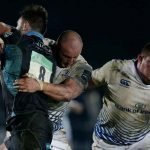