In an article for Scotland Rugby News, Peter McGunnigal of Murrayfield Song explains when he lost faith in Scotland and what we, the supporters, can do to help the team.

[dropcap]T[/dropcap]hat’s where I was when I completely lost faith. Not in the Scotland team who put in a strong spirited performance, not in Big Vern who has revolutionised the way we play, not even in the usual target for abuse (sometimes fairly, sometimes not), the SRU.

No, my loss of faith, I’m sorry to say, was in myself and my fellow Scotland supporters for making Murrayfield feel devoid of all positivity and belief.

Scotland huddle during the RBS Six Nations match between Scotland and…

Scotland huddle during the RBS Six Nations match between Scotland and England at Murrayfield Stadium on February 6, 2016 in Edinburgh, Scotland. Get premium, high resolution news photos at Getty Images

The players are giving it their all, but are we the fans?

When the team were less than a score down with 10 mins to go, we should have cheered, we should have shouted, we should have screamed and sung with every ounce of age-old Scottish defiance we had to will our team to victory. Yet, short of the odd small pocket, we didn’t. We sat in silence demanding that Scotland win, that they prove us wrong.

I suppose it’s understandable considering our results over the past 15 years, but the tide is turning. I know narrow losses are still losses, but what they are is competitive and where we were before was embarrassing. Last time the red rose was in town they scored 20 without reply. On our last visit to Cardiff it ended 51-3. We are a long way from there now, this is a good team under a good coach, they have ability and they will learn to win

Dan Cole and George Kruis of England celebrate on the final whistle during the RBS Six Nations match between Scotland and England at Murrayfield Stadium on February 6, 2016 in Edinburgh, Scotland. Get premium, high resolution news photos at Getty Images

It was a close game decided by small margins


We faced an England team in their most fragile mindset for a generation, we had the perfect opportunity to take our chance to get under their skin and reinforce our own boys with the belief that they could do it.

Instead, we sat meekly in silence, whilst “Swing Lo” did for the English exactly what we should have done for our boys. The most we could muster were a few boos when they sang. But that’s even worse than being silent. That means we’ve no reply but negativity. This was our home game, our home advantage. We should have drowned them out with our OWN songs.

England fans enjoy the prematch atmosphere before the RBS Six Nations match between Italy and England at Stadio Olimpico on February 14, 2016 in Rome, Italy. Get premium, high resolution news photos at Getty Images

The feeling walking back toward the city that night was 100 times worse than the 20-0 defeat, the shame burned.

I spent the rest of Saturday drowning my sorrows and Sunday with the fallout. Every journalist, pundit and fan with a Twitter account took a piece out of the team, the SRU and Stern Vern in the kind of sensationalist boom or bust reporting that has plagued our sport for years. The boos were rightfully condemned, but no one was saying publicly what I felt, namely that we let the team down when they needed us most. Home advantage at Murrayfield now officially meant nothing.

We need to make Murrayfield intimidating to play at again

On Monday, still brooding, I decided I couldn’t possibly be the only one feeling this way and decided to do something. So, with that in mind, I created @Murrayfieldsong on Twitter as a persona that could express everything I was feeling and would reach out to others. I  wanted fans to remember how much of a difference we can make to the team.

The second part was to ask the Scottish rugby public which song they’d like to sing and try to get everyone to sing it together at our beloved Murrayfield for the next home game (which is against France this Sunday).

We’ve had hundreds of votes and the song overwhelmingly suggested by fans was the old classic ‘Loch Lomond’. It’s a song everyone knows and provides something extra on top of the national anthem.

Oh! Ye’ll take the high road, and I’ll take the low road,
And I’ll be in Scotland afore ye,
But me and my true love will never meet again,
On the bonnie, bonnie banks of Loch Lomond.

So MurrayfieldSong and Scotland Rugby News are asking you, the Scottish rugby public, to commit to joining us in singing two rounds of the chorus on the 22nd and 72nd minute of the game this Sunday.

I’m not claiming this will win us the game, but players often talk about the fans being the 16th man. With the crowd giving them that extra push against France this weekend, in what is expected to be a tight game, we could very well be the difference.

So whatever the score, will you join us in belting out this classic Scottish chorus to show your support for the lads?

Will you share this with everyone to help get the word out?

And will you stand up and sing for Scotland? 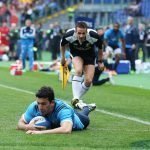 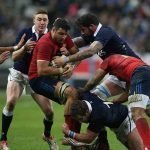