We’ve looked at Vern Cotter’s Scotland’s squad announcement to figure out what it tells us about the state of the nation and what the likely team will be for the opening Ireland test.

The team has changed drastically under Cotter

It’s clear from his selections that outgoing coach Cotter has resisted the urge to throw caution to the wind in the naming of his final squad, instead opting for a settled group that he will no doubt be hoping can deliver something of a swansong before his unceremonious replacement by Gregor Townsend.

In many ways, this squad is a testament to the work he has done over his time in charge and shows just how far the team has come. Only 15 players remain from Scott Johnson’s 2014 Six Nations squad, and Cotter has capped a staggering 26 players in his 3 short years in charge (a number likely to grow before tournament’s end).

John Hardie was parachuted in to great effect by Cotter

You just need to look at some of the player he debuted who have subsequently become household names – guys like Finn Russell, Mark Bennett, Zander Fagerson, John Hardie, Huw Jones, WP Nel, Josh Strauss, Hamish Watson, and Ali Price – to see how much depth he has added.

Nowhere is this depth more apparent that the embarrassment of riches in the centres. The fact that he’s taken the unusual step of naming 5 just goes to show how competitive selection has become in what was once Scotland’s problem position (what former coach Frank Hadden would have given for just 1 of them!).

There is also very clear strength in the backrow with any number of possible combinations from the 7 players picked. It would take a brave soul to bet on the exact makeup of the matchday 3, let alone the numbers each will wear on their back.

The addition of Cornell du Preez also adds something very different to the mix. The South African born fan favourite offers ball playing skills that none of the others possess. Whilst he’s faced injury and form problems this season, if he gets a chance to show what he can do then he has the potential to really turn heads during this tournament.

Cornell Du Preez of Edinburgh offloads under pressure from Shane…

Cornell Du Preez of Edinburgh offloads under pressure from Shane Geraghty of London Irish during the European Rugby Challenge Cup match between London Irish and Edinburgh Rugby at Madejski Stadium on… Get premium, high resolution news photos at Getty Images

The back three pretty much picks itself (Hogg and Seymour), with the only toss up being between Maitland and Visser. It is also worth noting what Cotter said about Huw Jones and Taylor being versatile. Could this see them move to wing or fullback if needed? It would certainly be a good way of getting some extra ball players into the side. All of which may make it difficult for Hoyland to add to his solitary 2 caps.

You’ve got to say it’s tough for Blair Kinghorn, but the extra centre means someone had to be cut from the back three. His time will come.

As ever, there are only two shades of Grey in the second row, but big Ben Toolis has been on fine form and will no doubt see his chance come. Behind them the drop off is a little more pronounced. Grant Gilchrist has been struggling to get back up to speed since his ridiculously long injury layoff, but would never let the side down should he be called upon.

Tim Swinson, whilst an excellent club player for Glasgow, has failed to impress at international level and may be considered lucky to feature ahead of Edinburgh’s resurgent Fraser McKenzie.

Rob Harley of Glasgow Warriors claims the lineout during the Guinness…

Rob Harley of Glasgow Warriors claims the lineout during the Guinness PRO12 Round 5 match between Newport Gwent Dragons and Glasgow Warriors at Rodney Parade on September 30, 2016 in Newport, Wales. Get premium, high resolution news photos at Getty Images

Bob Harley can cover both the back and 2nd row

There’s also the possibility of Rob Harley packing down in the middle, especially as a super sub, but the fact that he’s been named in the back row would imply Cotter has plans for him there.

The front row is also looking stronger than ever with Dell and Fagerson the incumbent props sandwiching either Ford or Brown. That said, it is a real concern to be without Cotter’s first choice props Dickinson and Nel, however there’s still hope that they will feature at some point in the Championship. Few would have expected to see Jon Welsh back in the blue jersey and Reid has struggled to find the form of his breakthrough season, so they will need at least one of Nel and Dickinson back fighting fit sooner rather than later.

Welsh bring these silky smooth skills to the front row

That’s not to say that there aren’t weaknesses in this squad. Whilst a very able kicker and safe pair of hands, it must be said that Duncan Weir represents a pretty big step down from Finn Russell at 10. If the dancer goes off for any reason, the whole backline will have to change style dramatically to suit the Edinburgh man’s more conservative style. Had Jackson been getting more starts at Quins or Horne not been injured, you suspect Cotter would have preferred their more similar styles.

Scrum half, whilst not an acute issue, could cause concern as the tournament wears on. Cotter has show time and again that he likes to have opposing styles starting and on the bench to offer something different in the closing stages. As team captain and goal kicker, Greig Laidlaw is almost certain to start every game, but his delivery is famously ponderous and can at times slow down the exciting backline.

Ali Price of Glasgow Warriors breaks free of the Munster defence during the European Rugby Champions Cup match between Glasgow Warriors and Munster Rugby at Scotstoun Stadium on January 14, 2017 in… Get premium, high resolution news photos at Getty Images

Price has been running riot this season

Ali Price is clearly included as the foil, but his inexperience was evident last weekend against Munster when he and Russell spurned a pop at a match winning drop goal. Russell plays best when he has a scrum half who can take some of the decision making burden but, whilst very exciting with ball in hand, it’s it could be argued that Price isn’t quite there yet.

Which leaves Henry Pyrgos, a man who has barely touched the ball in months. As a result he’s looked a little out of form since his return and, whilst Hart, Hidalgo Clyne and Kennedy have failed to set the heather alight, he may consider himself quite lucky to be included.

So which players from those 37 will make the matchday squad for the opening clash against Ireland? I’ll take a punt at this team, although the centres and backrow may well be drastically different.

Who do you think Cotter will pick for the opening game? Let us know in the comments below. 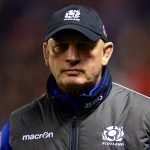 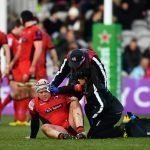