The Scotland team to play Wales in the Six Nations this Saturday at the Murrayfield has been named and includes five changes from the team that lost to France a fortnight ago.

Ali Price is set to make his first international start for Scotland in place of the injured Greig Laidlaw. With the regular captain ruled out for the rest of Championship, Scarlets flanker John Barclay has been given the mantle of leadership for the crunch game.

“John has played a vital role in our leadership group and has led by example throughout this and previous campaigns.”

Other changes come in the form of back-row Ryan Wilson, who has recovered from the elbow infection that kept him out of the France game, replacing the injured Josh Strauss while Harlequins wing Tim Visser gets his first opportunity of the championship as a straight swap for Sean Maitland, who suffered a rib injury playing for Saracens last weekend.

A further two unforced changes see Gordon Reid and John Hardie get their first start of the campaign, trading places with their respective compatriots Allan Dell and Hamish Watson, who have been named on the bench after starting the opening two games.

TEAM TO FACE WALES AT MURRAYFIELD 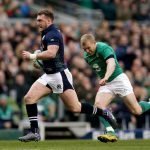 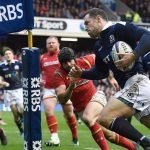