Scotland have beaten Wales 29-13 with a huge second half performance to claim a famous win over Wales that sees their Six Nation campaign back on track.

Tries came from Tommy Seymour and Tim Visser with man of the match Finn Russell converting both and scoring 5 penalties.

The game kicked off in characteristically cagey fashion with both sides putting in big hits and clearly feeling each other out. The first blood was claimed by Finn Russell in the 6th minute when he knocked over a penalty – banishing the demons of his infamous French miss in front of the posts. Six minute later it was Halfpenny slotting a penalty to even up the scores.

It looked for all the world like being a low scoring affair until the Welsh dynamo Rhys Webb took a quick tap that was sent down the line for a simple try for Liam Williams. Once again Halfpenny was on target to put them 10 points to 3 up.

Scotland’s much talked about scrum problems were once again exposed by a big Welsh pack, however Scotland’s back row was working overtime and turned over their counterparts time and time again.

It wasn’t until the 29th minute that Scotland back into scoring mode through another Finn Russell penalty, which was then duly cancelled out by Halfpenny a few minutes later.

There had been no sign of Scotland’s exciting backs and major doubts seemed to be creeping into the sold out Murrayfield crowd. That was until Scotland’s danger man Stuart Hogg dunked a little chip through that was seized upon by Tommy Seymour and duly passed to new Glasgow signing Huw Jones. He looked like going over but was hauled down by a desperate Welsh defence just shy of the line.

The try opportunity was spurned, but a penalty came soon after and it was clear something had shifted in the Scotland psyche.

Scotland came out in the second half reinvigorated and continued to record turnover after turnover, but this time they were making ground and scrum half Price started to marshal the backline.

It only took 4 minutes for the men in blue to cross the whitewash and it came following a brilliant move from Scotland that foiled the Wales defence with Stuart Hogg’s delayed pass, behind Huw Jones’ decoy run, opening up the space for wings Tim Visser and Seymour to combine for the final few metres. The latter man went over in the corner and, after a TMO review showed his foot wasn’t in touch, the try was awarded and then converted off the posts by Russell.

The try put Scotland in front an the crowd were then on their feet and in full voice, which in turn galvanised the players and it looked for all world like a different Scotland team from the first half.

The next points came from that man Russell on the 55th minute which further extended the lead to 6 points.

Almost 15 minutes into the second and Scotland were dominating possession, but this was still a very dangerous Welsh side and they constantly threatened through their dangerous scrum half Webb. It was that man who looked for all the world to have gone over but upon review it was Tim Visser, whose defence is oft questioned, who pulled his foot into touch. No Try.

It wasn’t just in defence that Visser was dominating, his heigh was being used for aerial bombs and more often than not he plucked the ball from the air ahead of his red opponents.

His hard work was duly rewarded when, in the 68th minute, a bit of Stuart Hogg magic saw him pass the ball in the tightest of angles to a waiting Visser whose nifty footwork and acceleration saw him cross the line to jubilant celebrations from the delighted Scottish supporters. Finn Russell once again converted and in a stroke Scotland 13 points ahead with just 12 minutes left on the clock.

However memories of the famous Welsh comeback in 2010 in which they scored 10 unanswered points in the final few minutes to record one of the biggest comebacks in 6 Nations history and break Scottish hearts. So needless to say, Scotland were still weary of the dangerous Welsh backline and swarmed into every tackled, ruck and maul with ferocity.

Hamish Watson was magnificent on the ground a secured two vital turnovers that might  otherwise have seen Wales close the gap. The Scottish supporters, sensing history could be made, were deafening in voice and every player responded by throwing their bodies into contact with abandon.

The key moment came in the 73rd minute when Scotland were awarded a penalty that Russell cooly and calmly slotted over to take the advantage to beyond to converted tries and guarantee Scotland the victory.

Despite a nervy few final minutes, Scotland held onto the ball and secured yet more turnovers to claim the win and send the crowd into rapture.

Man of the match Finn Russell had this to say following the match:

“The boys were awesome today. It was always going to be a tough game, especially with both teams coming off a loss. I’m so proud of the boys. We knew if we were in the game at half-time then we would be good enough and we dug deep. I’ve got Greig’s boots on and I was happy to keep the scoreboard ticking over with my kicking today.”

What do you think of the win? Can Scotland still go on and challenge for the title? Let us know in the comments below. 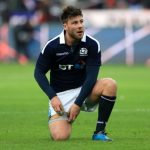 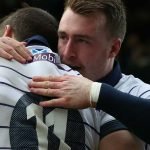