Gregor Townsend’s men have beaten the Wallabies by 24-19 in Sydney with a stunning display of tenacity and skill.

In a total 23 man effort Scotland ran and tackled themselves to a near standstill but, despite constant waves of Australian attack, they proved too much for Michael Cheika’s men.

There are very few finger nails left in Scotland this morning, but there plenty of broad smiles as the boys in blue achieved an outstanding victory in Sydney.

The last two matches against Australia weighed heavy on the memory, narrow single point defeats at Murrayfield and, of course, the infamous 2015 World Cup Quarter Final. You could be forgiven for turning away from the screen in the last five minutes of persistent Australian pressure and huge Scottish defence, but redemption was today.

The story of the game was very similar – huge tackles and defending as a unit, as the Wallabies looked increasingly uncomfortable.

The opening quarter of an hour Scotland looked lively and played front foot rugby, with Finn Russell showing from the outset why he deserves a Lions call up. However, the dominant possession wasn’t reflected in the score board, with only an early penalty giving Scotland the lead.

That was until Duncan Taylor made a cheeky interception from a scrappy Aussie ruck and whizzed straight over the line. Russell added the extras to take it to 0–10.

As often happens against a world class team like Australia, the response was swift and you wondered if Scotland had awoken the beast. Isreal Folau was that beast, as he came from deep to be on the receiving end of a polished passing move and score.

Scotland replied in no time with Finn Russell charging down a clearance kick and scoring. Scotland were taking the opportunities presented to them. You cant say that too often.

The half ended with another period of pressure from Australia, but Barclay and the back row were putting in some great tackles to hold the Aussies. That was until just before the break when Folau found himself on the receiving end of a cross field kick, before towered over fullback Tonks to dot down.

The second half started nervously for the Scots with waves of pressure in their 22. Thankfully, a mixture of sloppy finishing for Australia and good defence from Scotland kept them out. More often than not, the Wallabies were giving away penalties in sight of the Scottish try line, spilling the ball forward, giving them the opportunity to boot the ball back up field and reset.

It was 57 minutes before Australia finally found their way through to take the lead for the first time in the game. 19 -17

Australia had Finn Russell’s number in the second half, trying to put pressure on the fly half who had caused such havoc in the first 40. However it was from his turn in our own half that Scotland put together a great team try. Tonks and Taylor were right there in support to receive the ball, Taylor drawing his man to create the space for Hamish Watson to score a lead restoring try.

Thea ball went through five sets of hands from the 22 for the score and this time it wasn’t an opportune interception or charge down, this was a solid attacking move. If this is Townsends influence, we should be delighted, it was as good a try as Scotland have scored in recent years…and against Australia to boot!

With ten minutes to go, the mind wandered to the pain at Twickenham two years. Australia were putting on the pressure and spreading the ball wide, but Scotland were making last man tackles with the pack absorbing short balls through the middle.

Barclay was having a great game in defence. Ball in hand Scotland were not making yards, but they were keeping their composure in their own half.

That defence was certainly needed with wave after wave of Australian attacks. But the hits were so frequent and the competition​ for the ball so fierce, that the Wallabies simple couldn’t break through.

It was a nervy finish though, and with 4 minutes left on the clock Australia knocked on from the line out in our corner, leading to a scrum on our 5m line. Rather than panic, replacement no.8 Josh Strauss picked from the base of the scrum to make it safe and take the contact. In games gone by Scotland would have buckled, but this kind of mature decision making showed how far this team have come.

All the way to the whistle Australia could see the try line but there was no last gasp winner today in Sydney, just a famous victory and sweet revenge for Scotland. 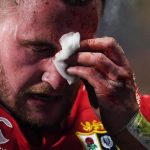 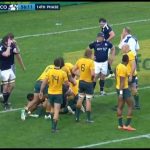