Gregor Townsend has made 12 changes to the starting team that famously beat the Wallabies last weekend for this Saturday’s Final Tour test match against Fiji in Suva.

The biggest changes come in the forms of Glasgow’s dynamic centre Nick Grigg, who will win his first cap, and Ross Ford, who is set to overtake Chris Paterson to become Scotland’s most capped player of all time with 110.

The men in blue, who are seeking a clean Summer Tour sweep, have an almost entirely new backline, with Duncan Taylor the only survivor.

Harlequin Ruaridh Jackson comes in at fullback for his first start since Japan last yeat, whilst Tim Visser and Damien Hoyland complete the all new back 3.

It’s another fresh pairing in the half backs with versatile Peter Horne replacing new Lion Finn Russell and Henry Pyrgos coming in for Ali Price.

Record breaker Ford is part of a formidable from row with WP Nel and Alex Allen brought on in place of Zander Fagerson and Gordon Reid.

Jonny Gray retains his place in the boiler room, but this time he’ll bind to the experienced frame of clubmate Tim Swinson.

The only surviving back rower is captain John Barclay, who will be flanked by the hard hitting Josh Strauss and John Hardie. The latter (alongside Alex Allen) will be making their first appearance on tour and will be hoping to make a good impression.

The bench is entirely made of player who vanquished Australia last week, giving a host of match winning options to call upon later in the game.

Coach Townsend was excited by the opposing occasions for Ford and Grigg saying:

There were many who thought Townsend too conservative in his your choices, with Grigg the only uncapped player named. But so far his decision had been vindicated with 2 wins from 2.

Being able to call on big names like Strauss and Hardie shows that there’s never been this much depth in the professional era. However there’s no complacency from the former Scotland and Lions fly half: “We have to make sure that we’re accurate when we play our attacking game and whenever we kick. Fiji will come alive if we’re loose in those areas. It should be a cracking Test match.”

What do you think of the team named? Can they make it a clean sweep? Let us know in the comments below. 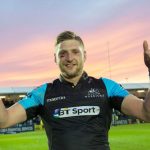 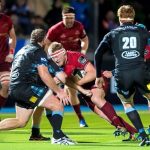