Gregor Townsend has today announced his team to take on Japan in this Sunday’s must win clash at the International Stadium in Yokohama.

In total there are massive 12 changes from the side that put Russia to sword, including Scotland’s captain Stuart McInally – who drops to the bench if favour of Fraser Brown. Greig Laidlaw has been picked as captain in his stead, a role he knows well as he holds the record (30) for most caps as captain of the Scotland.

The only other survivors from Wednesday’s clash are Darcy Graham and Tommy Seymour.

Eyebrows might also be raised by Tonnie’s decision to drop Glasgow Warrior halfback pair George Horne and Adam Hastings to the bench and out of the 23 respectively. Between them they racked up 5 tries against the Russians and it’s surprise to see George’s brother Pete picked on the bench ahead of Hastings. It’s safe to assume tiredness was a key factor.

“This is the game a lot of people are looking forward to. We have talking about it as one of the rare occasions where we get to play in a straight shoot-out for the semi-finals. It is a game you dream to be involved in.”

Another notable absence is Sean Maitland who is suffering from a groin strain.

With the team named, all eyes will turn to the Rugby World Cup organisers and World Rugby, who will announce on Sunday morning whether Typhoon Hagibis will effect the game. As it stands, everybody involved says they’re working on the assumption that it will. We’ll be sure to provide updates as soon as we have them. 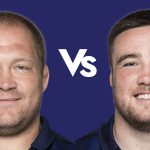 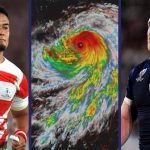