It’s been a rough start to the season for Glasgow Warriors fans and players. Full starting teams of players missing for the world cup and the team have lost three out of their opening four games; including a particularly painful demolition by the Cheetahs in the opening game.

It leaves a lot of people wondering, where was that electric team that carried us all the way to the Pro14 Final last year? It’s been tough to watch at time but the Warriors themselves will be their own biggest critics. They’ll know that Friday’s game against the Southern Kings is a must win game. Nothing less than a bonus point will be acceptable in front of a home crowd against a team that are languishing at the bottom of the conference. It’ll put bums in seats and hopefully carry some confidence into the next few games that we can build on.

With that in mind here is the XV that I think should start against the Kings to give the Warrior’s season the jump start it needs:

A position that the warriors perhaps lack a lot of competition in for starting berth, especially with the departure of Jamie Bhatti. Kebble has taken this with both hands and asserted himself as the team’s first choice loosehead at the moment, we’ve yet to see Seuli start in a Warrior’s jersey. If he can stay on the referee’s good side he can be an aggressive and destructive ball carrier. He could cause the Kings some serious problems and open some gaping holes in the defensive line.

Fresh back from Japan, Turner had a season curtailed by recurring concussion problems last year that thrust Grant Stewart into the team’s forefront. Given the amount of game time he had it seems likely that Brown will be rest making Turner the most likely option. A hooker with serious pace for a big man, he’s known to make a break or too. As well as this he should add some much needed solidity in the lineout, bringing his international experience to the fore.

Tightheads were badly missed during the world cup period. With both Fagerson and the Nuke away playing for Scotland and Tonga respectively, expect to see one or both in this game. My most likely thought would be Fagerson to start, he adds more ball carrying ballast as well as being a menace at the breakdown. If he can keep his feet under him in the scrum, as is often said to him then this front row may find themselves the stars of the show in the pack.

One of the young guns mentioned in my previous post. Cummings was unlucky not to get more game time than he did in the World Cup, though this could benefit Glasgow. A bright talent Cummings brings a balance of pace, power and soft hands perfect for those Dave Rennie style offloads. Often being found making the hard yards that Glasgow have been criticised for being unable to make in the past, this could his chance to come bring into the fold with a huge impact.

Speaking of talent and potential, MacDonald has been a light among these dark times. Injury limited his game time last season but he’s grabbed his opportunity this season in ernest and put in some brilliant performances like against the Cardiff Blues. He brings the energy that the team needs, paired up with Cummings in the engine room and there’s some serious grunt.

A head knock ended Ashe’s game against the Dragon’s prematurely last week. A hard abrasive carrier and a real work-horse in the side, he too has had his fair share of injuries with last season being one of his best. This game would be a great test for him.

Gibbins adds that mongrel to the side and the breakdown. A favourite since he first joined the club and it’s easy to see why. It’s imperative he lead the side to a good victory so that they can build on this and start the momentum into the season.

Stung at being left behind by the Scotland team, Fagerson appears to have turned his frustration on his opponents. He has become the big ball-carrying number eight that we have cried out for. Kept Ryan Wilson out of the team last season and continues to impress.

A livewire scrum half with a knack for scoring tries, George Horne must start for the Warriors. Restricted to the bench for the World cup with the exception of Ireland (where he didn’t feature) and the Russia games expect to see him back in the side. With debate surrounding whether Nick Firsby should be starting Horne would be exactly what we need back at number nine. Watch for him tracking on those support lines with an eye on the try line.

Speaking of people who know how to score, Adam Hastings is one man who is familiar with the whitewash. Not afraid to carry the ball to the line and through it, Hastings can add that creative spark that the backline needs to spring into action. With Brandon Thomson basically played into the ground last weekend Hastings is the man to give the team a shot in the arm.

After hanging up his international boots the Canadian winger has decided he just wants to add to his tally as Glasgow’s top try scorer. An excellent winger who is deceptively strong in the carry, he’ll bring his trademark combination of pace and power out wide. Watch out for that shock new haircut, he’s gotten into Hoggy’s peroxide.

This one will be controversial no doubt, but Horne will add that second distributor role that Glasgow can thrive on the get the ball out wide, as well as an array of clever kicking. During the World Cup he played well, even carrying to add a new dimension to his game. Hopefully he will help shore up some of the questionable defence.

Jones has reacted well to being left behind with the Warriors. We know of the danger he poses, the lines he runs, the offloads. This season we’ve even seen him come in as first receiver and playmaker once or twice. Possibly foreshadowing a move to fullback. Paired up with Horne would be the perfect blend of stability and flair while resting the likes of Sam Johnson.

The scrum-half turned winger had a somewhat quiet game last week. With the home crowd behind him and some of those elusive running lines watch out for this little Fijian because he has gas to burn. Much improved on many aspects of his game, he is another catalyst that could set the game alight.

Perhaps the trickiest position to decide on. Glenn Bryce has done well with the time he has had but it is likely Seymour will get the nod at fullback to rest Bryce. Having played fullback against the Blues and Leinster, he is no stranger to the position. His aerial skills and counter-attacking threat will pose a real danger to the Kings.

Some may think this squad a bit full on for a game against the Kings, but Glasgow need to lay down a strong marker now that they will have some internationals back. There will be no excuses from here on in. 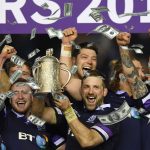