After 4 days of uncertainty and thousands of column inches, not to mention legal threats, World Rugby have finally made a decision over whether or not the crucial Japan vs Scotland Pool A decider will go ahead.

Thankfully for Scotland fans, at least, the game is due to go ahead after the governing body World Rugby inspected the pitch following Typhoon Hagibis, checked the entry points for fans and deemed the game was safe to play.

The game is crucial for Scotland’s chances of progressing to the Quarter Finals because any cancelled game would have been deemed a draw – which would have left Japan on 16 points and Scotland on 12. Ireland have already qualified following their humbling of Samoa earlier, so if the game had been called off then Japan would have gone through as Runners Up.

Any celebrations will inevitably be muted by the stark realisation that this typhoon is the biggest to hit Japan in over 60 years and has cost 3 confirmed lives and displaced hundreds of thousands.

I’m sure all our thoughts and prayers will go out to the people of Japan in this terribly difficult time.

In terms of rugby, Scotland need at least a win to progress to the Quarter Finals – which will be no easy feat considering how well Japan played against Ireland.

But at least one thing’s guaranteed, Scotland’s fate is in their own hands and won’t be decided by the weather.

Let us know your predictions in the comments below… 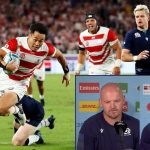