Scotland have announced a much changed 23 for their opening fixture of the Guinness Six Nations Championship at the Aviva Stadium in Dublin.

In total there are 10 changes from the side that lost to Japan at the 2019 Rugby World Cup. The most notably of which is uncapped back row Nick Haining who slots in at no.8 alongside Hamish Watson and Jamie Ritchie – making it an all Edinburgh back row.

The 29 year old Australian-born back rower qualifies for Scotland through his Dundonian grandmother and his rise to international rugby is something of a fairytale considering the fact that, just 2 years ago, he was playing for Jersey Reds in the 2nd tier English Championship.

In the second row 23 year old Scott Cummings will make his Six Nations debut alongside Jonny Gray and in place of former Scotland captain Grant Gilchrist.

There are also changes to the front row with vice-captain Fraser Brown the only surviving player from the Japan game. Rory Sutherland and Zander Fagerson come in for Alan Dell and WP Nel at loose and tight head respectively.

It will be a surprise for many that the accomplished and uncompromising South African born pair have dropped out of the starting team, but it may be an indication of Townsend looking to the future now that we’re in a new Rugby World Cup cycle.

At scrum half Ali Price has edged clubmate George Horne in what must have been one of the tightest calls considering the rare form both have been in for the Warriors of late.

With Scotland maverick Finn Russell excluded following a drinking session fallout, young Adam Hastings slots in at fly half with Glasgow Warrior pair Sam Johnson and Huw Jones outside him. For Jones it will be a welcome return to the side after the heartbreak of missing out on selection for the Rugby World Cup.

In the back 3 new Captain Stuart Hogg partners Edinburgh back Blair Kinghorn (who replaces the injured Darcy Graham) and Scotland veteran Sean Maitland. At 31, many had expected Maitland to retire following the World Cup but, such is his form for Saracens, it seems there’s plenty left in the tank for the former Crusader.

Breaking with tradition, Gregor Townsend has chosen not to name a recognised fly half on the bench, so should Hastings be injured it will probably be Blair Kinghorn or replacement scrum half George Horne who will expected to step up to the pivotal position.

New captain and starting full back Stuart Hogg, who has an almighty boot, might be another option to slot in at 10, but with all 3 players possessing scant experience in the position, it looks like an almighty gamble from the beleaguered Head Coach.

The other back replacements are fan favourite Rory Hutchinson, who many felt was desperately unlucky not to go to Japan, and Gloucester’s Chris Harris.

Former captain Stuart McInally seems to have have fallen out of favour following a disappointing World Cup, but has still secured a place on the bench alongside teammate Simon Berghan and London Irish prop Allan Dell.

Edinburgh man Ben Toolis deputises at lock and back rower Cornell du Preez is set to make an incredible comeback following a horrific larynx injury sustained playing for Worcester last season. The rangy back rower was out for 6 months and had feared he might lose his voice and be forced to retire, but against all the odds is back playing at the top his game.

Townsend said: “We have managed to cover a lot of work in the two weeks we’ve been together and we’ve been impressed with how our players have taken on information and bonded as a team.

“We must be a relentless collective on the pitch and a nightmare for the Irish to deal with while having the ability and awareness to impose our game at that intensity.”

Full Team To Face Ireland at the Aviva Stadium:

What do you think of the team named? Let us know in the comments below 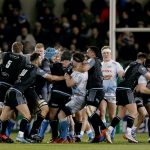 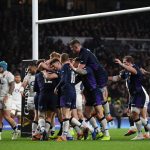